Hi everyone! I hope you are having a wonderful summer, staying healthy and safe. I’ve been busy writing (and not doing much else) but today I have a little exciting news — not one but TWO cover reveals!

We’re also only a little more than a month away from the release of A TOUCH OF STONE AND SNOW, the second book in the Gathering of Dragons series. I can’t wait for you all to read Lizzan and Aerax’s story!

The prequel novella for this series was actually released years ago, but I know that the re-release of the novella in ebook now might be a little confusing regarding reading order — and you should be fine reading it either before or after A HEART OF BLOOD AND ASHES! That book barely references any of the events that happen in the novella. A TOUCH OF STONE AND SNOW refers to the novella a little more, but you won’t be lost if you don’t read it and the prequel isn’t necessary to understand the overall story arc (but as with any series, you will probably enjoy recognizing characters from old stories when they pop up.) 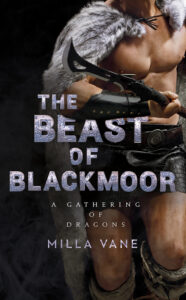 Dive into the world of beasts and barbarians in this prequel to the exhilarating Gathering of Dragons series by Milla Vane.

A warrior princess must tame The Beast of Blackmoor to earn a place among her people. When she arrives in Blackmoor, however, she finds a land cursed by a demon and ruled by an evil warlord…and discovers that the beast isn’t a monster, but a barbarian warrior who intends to do some taming himself.

Please note: This story was originally released in print and ebook in the NIGHT SHIFT anthology, featuring stories by Ilona Andrews, Nalini Singh, and Lisa Shearin. 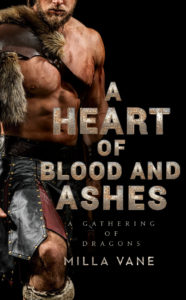 Yet the woman Maddek captures is not what he expected. Though the last in a line of legendary warrior-queens, Yvenne is small and weak, and the sharpest weapons she wields are her mind and her tongue. Even more surprising is the marriage she proposes to unite them in their goals and to claim their thrones—because her desire for vengeance against her father burns even hotter than his own…
Available Now in Print & Ebook!

Milla Vane returns to a world of kings, magic, and passion in her exhilarating A Gathering of Dragons series, as a great alliance forms to stand against an evil warlord intent on their destruction.

Danger lurks in the western realms. The Destroyer’s imminent return has sent the realms into turmoil as desperate citizens seek refuge—but there’s no safety to be found when demons and wraiths crawl out from the shadows. Even Koth, a northern island kingdom left untouched by the Destroyer a generation past, is besieged by terrors spawned from corrupt magics.

When Lizzan leads the Kothan army against these terrors, only to see her soldiers massacred and to emerge as the only survivor, she is called a coward and a deserter. Shunned from her home, Lizzan now wanders in solitude as a mercenary for hire, until she encounters a group of warriors seeking new alliances with the northern kingdoms—a group that includes Aerax, the bastard prince of Koth, and the man who sent her into exile.

Though they were childhood friends, Aerax cannot allow himself to be close to the only woman who might thwart his treacherous plan to save their island realm. But when a goddess’s demand binds them together, Lizzan and Aerax must find a way to overcome their painful pasts. Or there will be no future for the western realms… 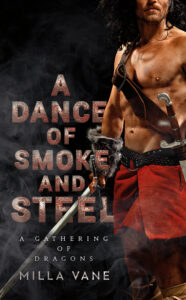 As Anumith the Destroyer’s army draws nearer to the western realms, an alliance is forming to stand against him. The heir to the throne of Krimathe embarks upon a quest for the goddess Vela—a quest that the goddess has promised will give her strength enough to defeat the Destroyer.

All that Laina must do is to stay silent…and serve a man she has sworn to kill. A man who helped destroy her family.

The son of a demon warlord and only recently freed from years of torture, Saxen seeks to make amends to his people before facing the justice of the Krimathean queen’s blade. When a mysterious, silent woman who wears a questing cloak joins his small band of warriors, he only wishes to rid himself of her.

But she isn’t so easy to get rid of—and fulfilling her quest might come at a far higher cost than Laina could imagine. For she might gain the strength to defeat the Destroyer…but what she needs from Saxen will destroy him first.

A Heart of Blood and Ashes is here! The Love Over Hate Auction! Signed Iron Seas books & so much more!